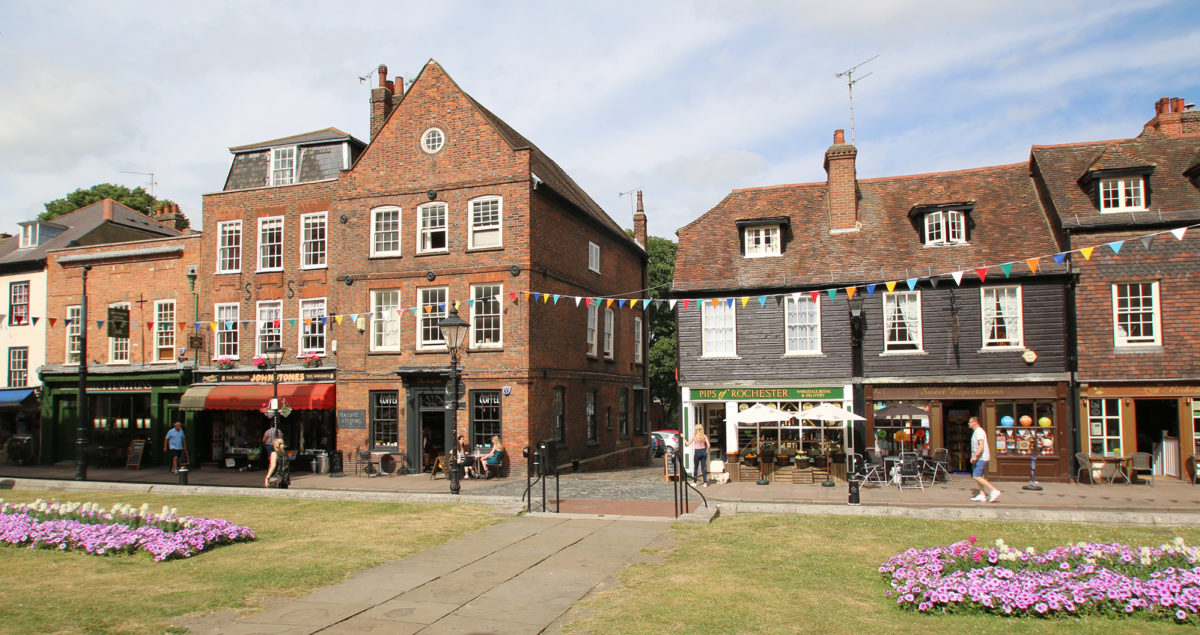 Rochester Independent College is in Kent, just south east of London. Kent is known as the garden of England but is also close to great beaches and home to historic cathedral cities. It’s a tourist hotspot with Lonely Planet placing it on a list of Europe’s best holiday destinations and Medway bidding to be City of Culture in 2025.

Rochester itself is a small town, with a rich heritage and a flourishing contemporary arts scene. There’s a vibrant student buzz with the University of Greenwich, the University of Kent and the University for the Creative Arts moving increasing numbers of courses into their local campuses.

Rochester offers a quieter life than London, close to areas of outstanding natural beauty like the North Downs, yet within easy reach of all the facilities the capital city has to offer. Regular trains run from Rochester to London in just under 40 minutes and Ebbsfleet for Paris and Brussels on the Eurostar is just 10 minutes away.

Rochester is famous for its connections with Charles Dickens and with a magnificent Norman cathedral and a striking castle that can be viewed from RIC’s classrooms and the Halls of Residence bedrooms.

Rochester has parks in the castle and along the Esplanade and Shorne Woods Country Park has 288 acres of ancient woodland. It’s a 30-mile drive or a 45-minute train ride from Rochester to Whitstable, so seaside day trips are a breeze.

Rochester offers a range of quirky vintage shops and independent boutiques as well as museums, delicatessens, second hand bookstores and some great restaurants, micro pubs and coffee houses. There are regular events on the traditional cobbled High Street including the Dickensian Christmas Festival.

Rochester offers London living without the capital's price tag. The Daily Telegraph said: "The housing stock in is reminiscent of Clapham and Highgate – but the Victorian and Georgian terraces cost £170,000 to £240,000, rather than £1 million-plus!" 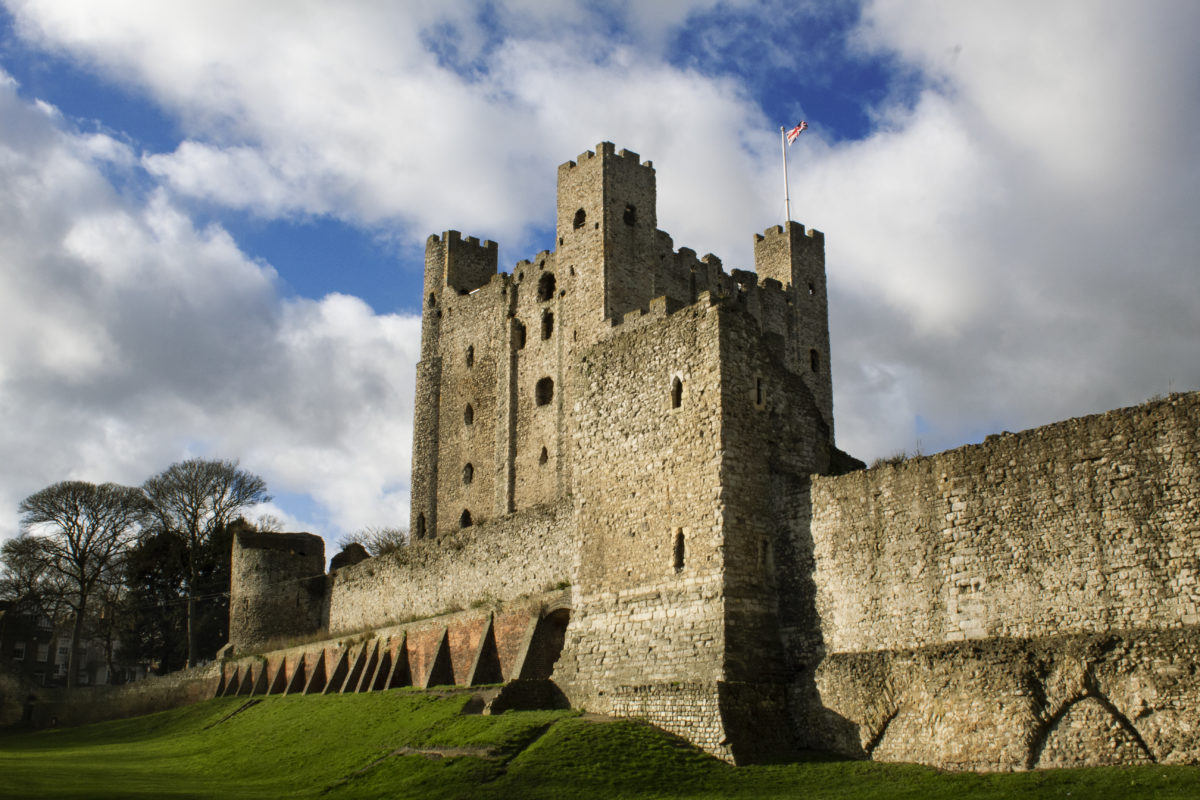 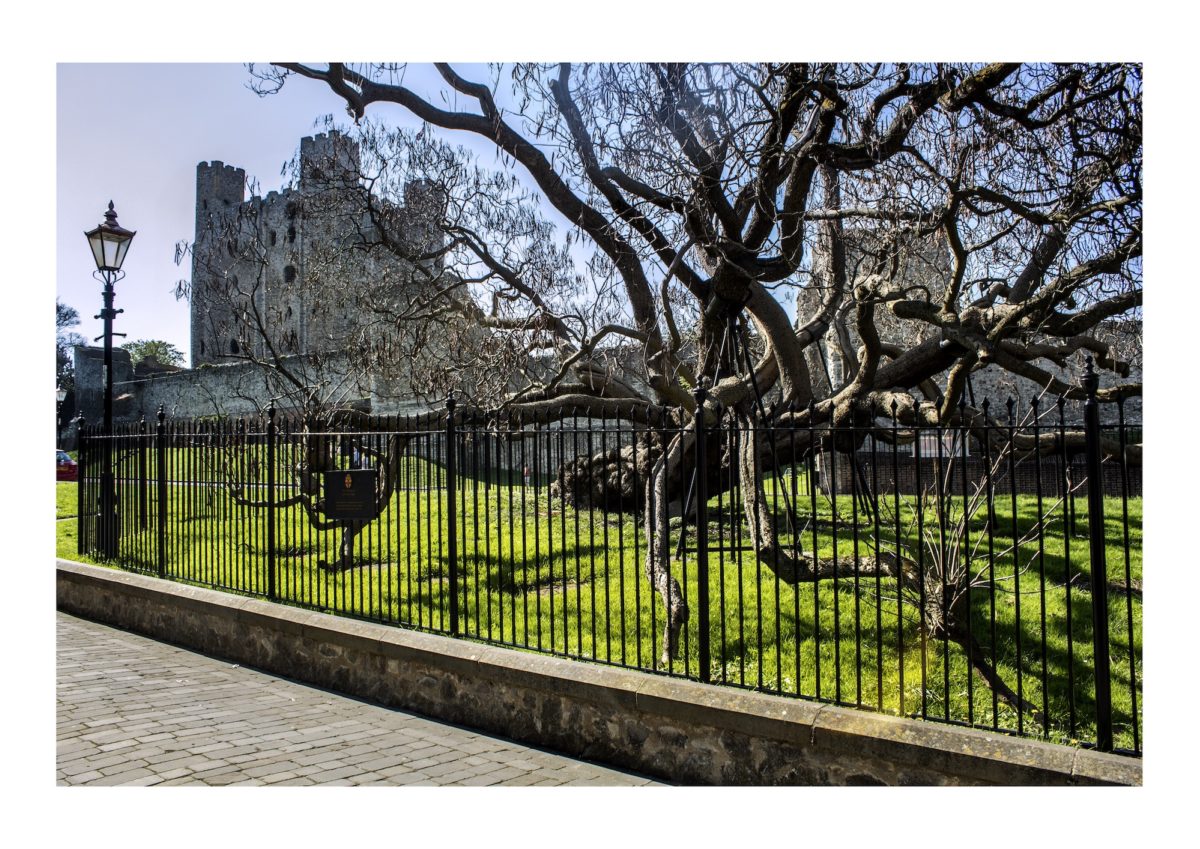 The photograph of Rochester Castle above on the left is by RIC student Xinao Li.

Live and learn in a cultural hub

Rochester is a great place for the creatively minded. The castle grounds host live concerts in the summer from music’s biggest names. Medway’s Arts Development Team stages the annual Fuse Medway Festival which transforms the streets and open spaces with free arts events. Local galleries include Nucleus Arts and The Deaf Cat gallery where RIC students exhibit their work. The Zandra Rhodes Gallery is located at opposite the RIC campus at the University of the Arts and we are next door to The Medway Little Theatre where RIC students often attend Youth Company classes and help stage productions that travel to the Edinburgh Festival Fringe, and the Gibraltar One-Act Play Festival. There are nearby multiplex cinemas and music venues. 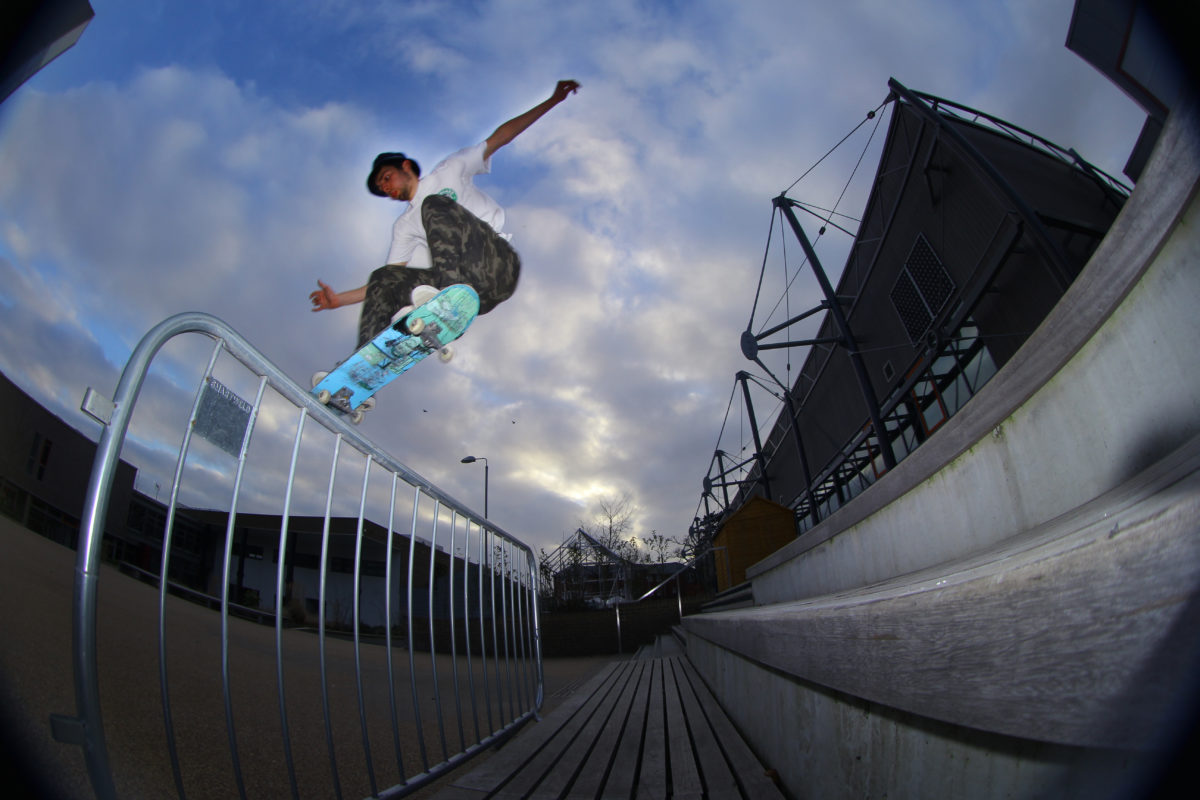 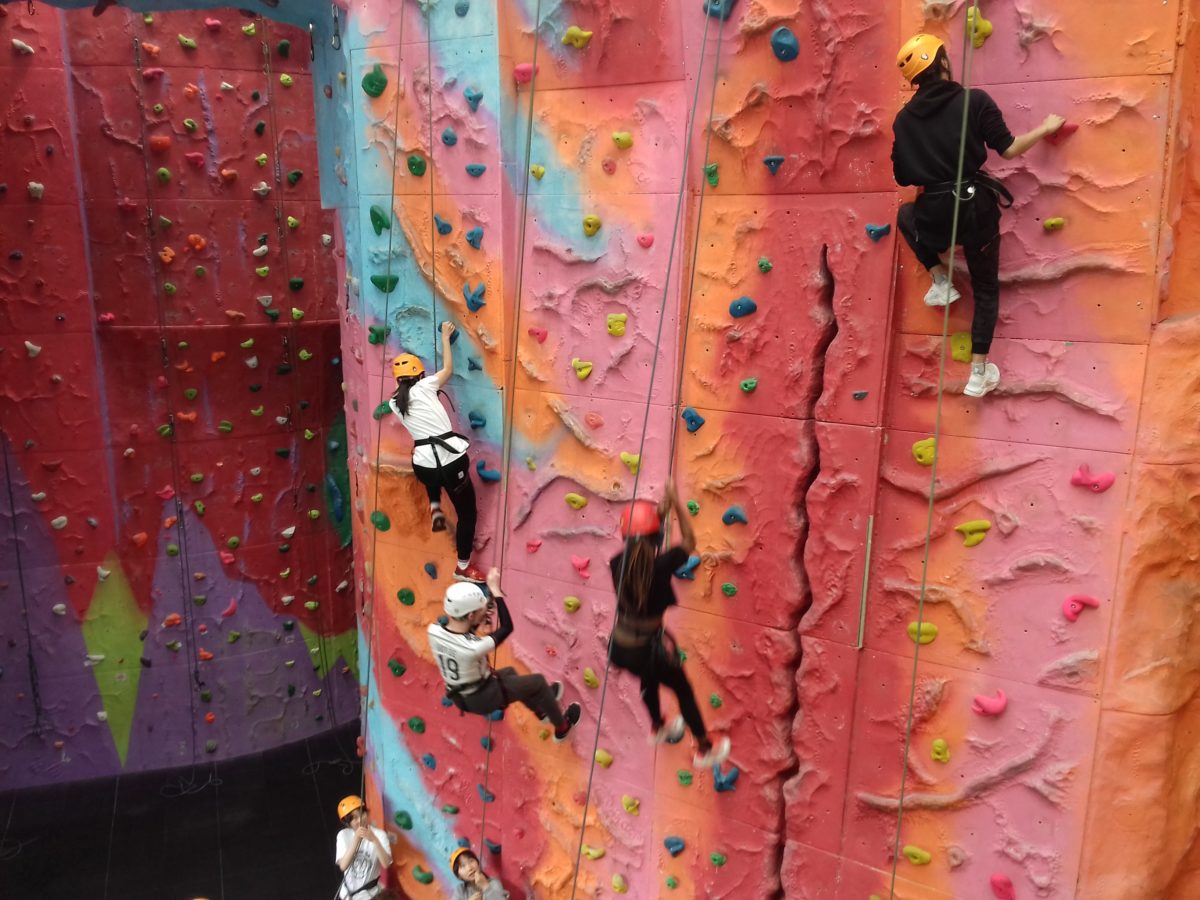 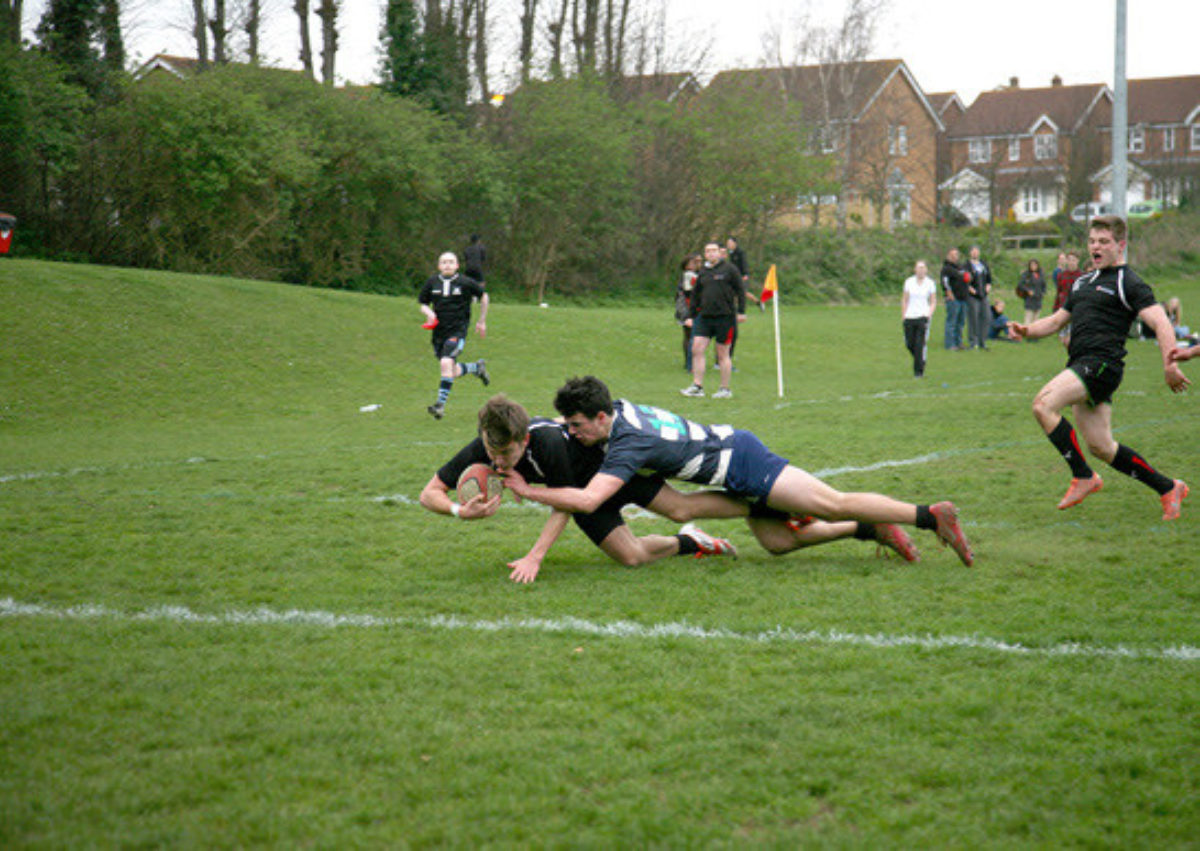 Where the sports facilities are Olympic class

Sporty students use Medway Park, a multimillion-pound sport centre Facilities include a swimming pool for fitness or fun, athletics track, sports halls, fitness suite and spa, a sports therapy clinic and respiratory clinic. The park was an official training camp for 13 Olympic and eight Paralympic sports for the London 2012 games. The nearby Arethusa Venture Centre offers a climbing wall, archery, sailing and canoeing and there are local football and rugby clubs.

Opposite RIC are tennis courts and a bespoke skate park for skateboarding, BMX and in-line skating. The park was built by the council after former RIC student Shelley Yates presented a 600-signature petition. Shelley says: “There was a real demand for a skate park in Medway, so I encouraged my friends to help me persuade the council to build the park.” 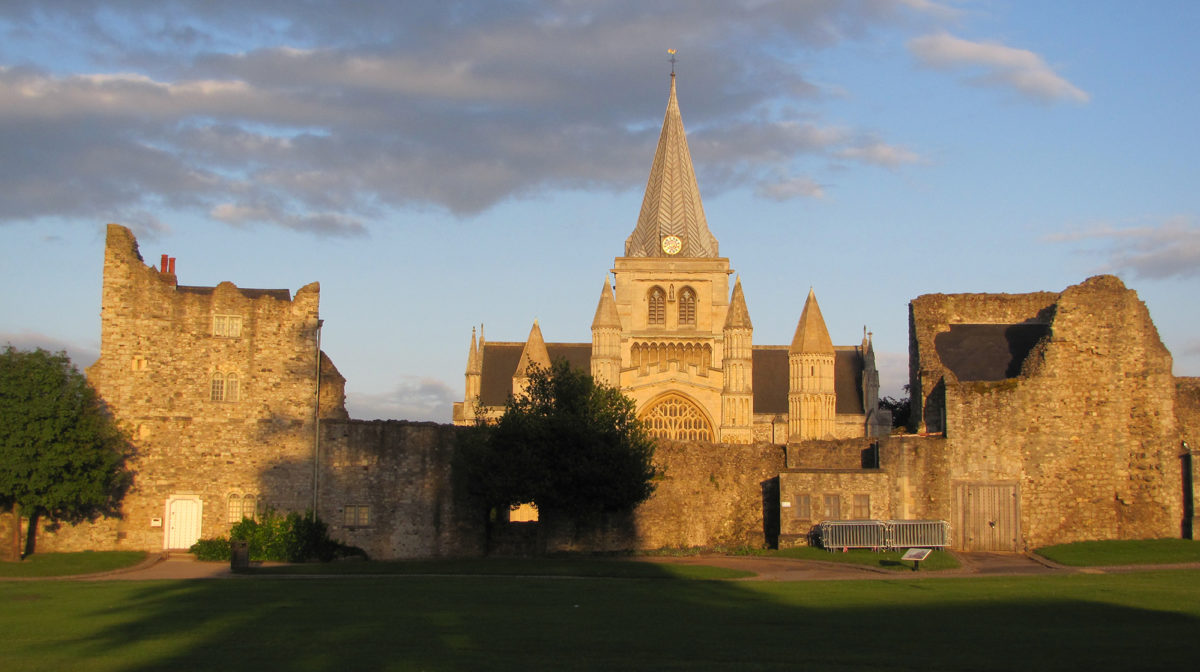 And history is around every corner

The former naval dockyards at Chatham, founded by Henry VIII and where HMS Victory was built are now a world famous tourist attraction with World War II warships and Cold War submarines. Nearby Fort Amherst is Britain's largest Napoleonic fortress. 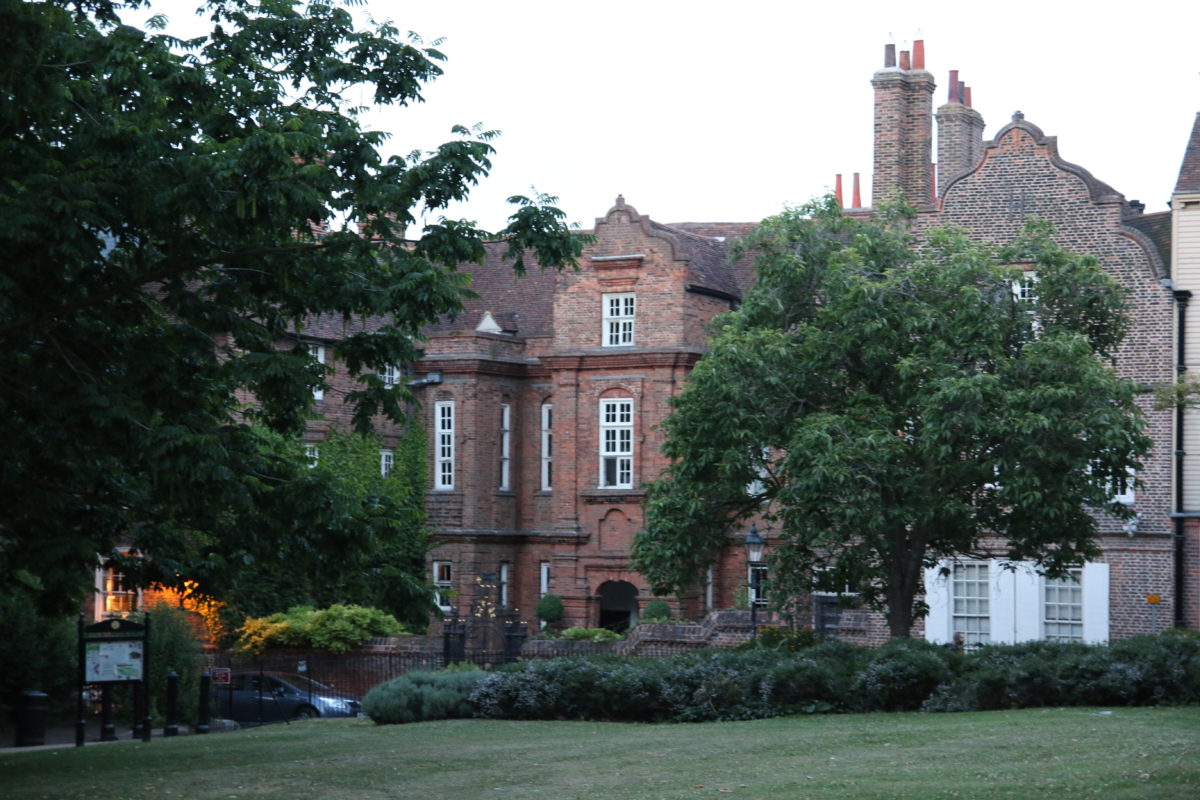 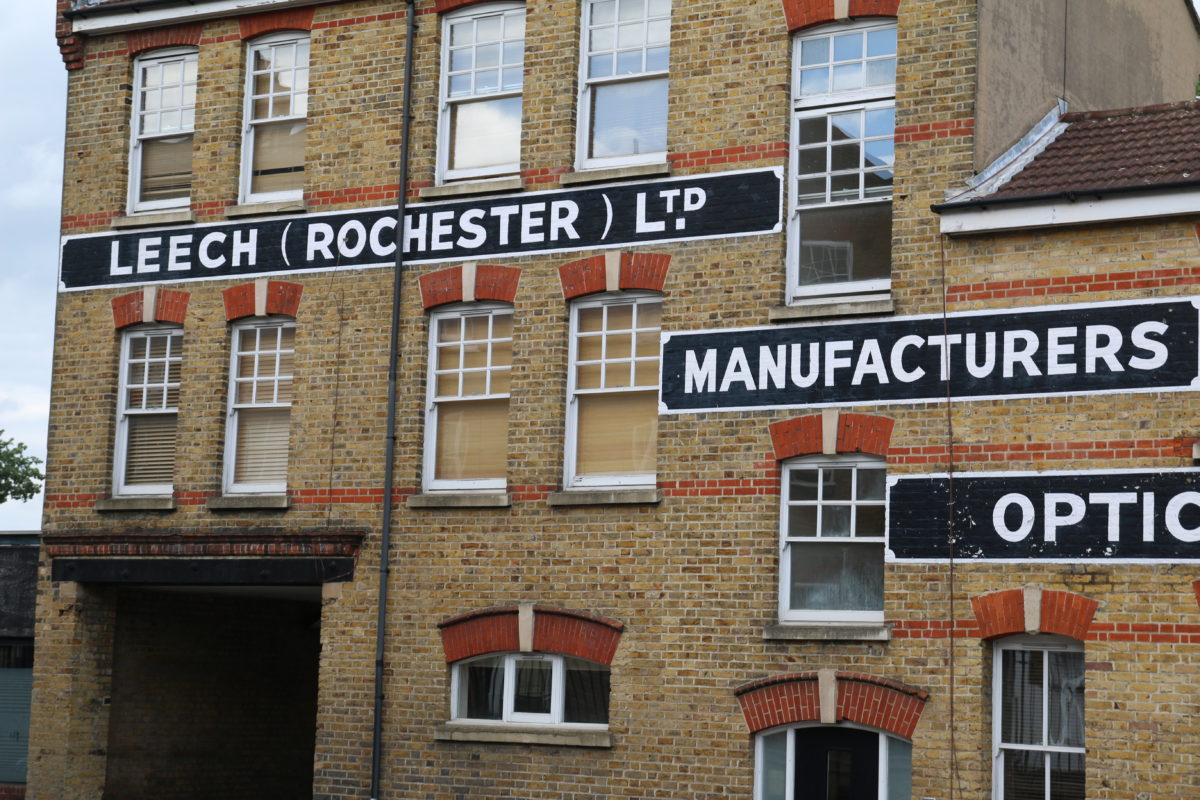 • Rochester may be famous for its Dickens connections but the town’s most famous son didn’t always return support the city- it appeared as Mudfog in The Mudfog Papers and ‘Dullborough’ in The Uncommercial Traveller.

• The local area has a distinguished place in film history. When David Lean was making his adaptation of Dickens’ Great Expectations here he previewed Brief Encounter in a cinema near Chatham dockyards. More recently the historic setting has been the backdrop for Suffragette starring Meryl Streep, Etan Cohen’s Sherlock and Watson and the Bond film The World Is Not Enough. RIC has encouraged many young filmmakers over the years. Clio Barnard, the BAFTA award-winning director of The Arbor and The Selfish Giant, was filmmaker in residence at the College. • A large Kentish smock windmill known as Boys Mill stood in the RIC grounds at the top of Star Hill from the end of the 17th Century. Part of the hexagonal base is still standing as you walk up to New Court.

• The Buckmore Park Kart Circuit is where many current and past Formula One drivers learned their trade, including Lewis Hamilton. It’s a popular trip for RIC boarders and Lower School students.

• Legendary DJ Pete Tong of “it’s all gone…” fame went to school in Rochester. Our Year 10 Music class were very lucky to be invited along this year to watch a rehearsal for his Ibiza Classics at The Music Bank Studios in London, a fantastic opportunity to see a live orchestral rehearsal and to see how a music production team works for a large scale music event.

• The newly opened Huguenot museum in the High Street houses the French Hospital archive. The hospital moved to Rochester in 1959 after having been originally founded in St Lukes, Finsbury in the City of London in 1718.

• The RIC Lower School has a connection with iconic fictional astronaut Major Tom and rock star alien Ziggy Stardust. New Road House, home to our younger students, is fondly remembered by many in Rochester as The Good Companions Club. A young David Bowie is recorded as performing at the club in 1964, before his career blasted off into the popular cultural firmament.

• Other famous people with Rochester connections include musician Nitin Sawhney and children’s entertainer Rod Hull who lived for a time with his Emu in Restoration House.

• RIC’s boarding house, the former Dickens Hotel on New Road has 35 hotel standard single rooms. Its restoration sees the striking building which housed the University School of Rochester from 1897 to 1940 returned to educational use.

• Rochester is also home of the medieval manuscript the Codex Roffensis one of the most important surviving texts from the Middle Ages. • Local artist, poet, musician and provocateur Billy Childish has been an RIC Visiting Lecturer. Billy was closely associated with the Young British Artists, founded the Stuckist movement and has been described by fellow artist Peter Doig as “one of the most outstanding, and often misunderstood, figures on the British art scene.” Billy is the only RIC member of staff as far as we are aware to have inspired the name of a Kylie Minogue album and to have counted Kurt Cobain, Jack White and Madonna amongst his celebrity fanbase. The Rochester High Street mural of Billy is titled Brexit Is Childish...

"Every time I go to Rochester it surprises me. I forget how ravishingly beautiful it is, the Norman castle and ancient cathedral high on a bluff above the Medway, curling lanes of old houses, bookshops and flint walls tumbling down the hill. The views! The long Medway valley, lined with the foothills of the North Kent Downs, is dreamy. The history! Pilgrims and scholars, naval bases and Dickens. There’s no escaping him here. Dickens spent much of his childhood in Chatham, next door, and his latter years at Gad’s Hill Place, just outside. The Swiss chalet in the garden where he wrote his novels now sits, surreally, on the High Street. Nearby, you’ll find the Satis House, of Miss Havisham fame, the Pumblechook’s chambers, and crystals and karma at the Little Dorrit new age shop." Tom Dyckhoff Iain Sinclair: "I mean, I grew up with Kerouac’s On The Road, which was the notion that you move, you’ve got to move, and you’ve got to learn to transcribe landscape. But I did not really want to spend my life in a car so I tried to develop techniques for rapid transcription, logging. I recently had to do a project in the Medway area, whereby we were given a tiny square of a map and in one day had to go to wherever this piece of the map was and write a notebook. I found … I went to Chatham and I wrote this book in five hours and it was dead easy because the method was so well established: looking at the map, marking the coordinates, starting early. Had the breakfast, found an alms house, found a lepers’ hospital, found Dickens’s house, took an overview of the whole panorama, met a weird character in a pub, blah blah blah. blah, blah. Sit down and, you know, money for old rope …

Iain Sinclair: Well in one copy … (laughs) … So I typed it and stuck the photographs in and made a book. One of the other guys who was doing it with me was just gob-smacked, I mean not at the quality of it, but just the quantity that I was able to produce, the narratives and information from a single walk. Because the one who was most defeated by the conceptual notion was a very urban black writer who had come out from Brixton and got on the train and ended up in Rochester. He got out of the train and wrote about four lines because … he didn’t know how to approach this, it was so bizarre and so English and so unreadable. And he said all he could do … he went up and down and finally found a barbershop where there was another black guy and they sat down and had a chat and he thought, thank God, there is one civilised person here. And he got back on the train and went home …

Will Self: That makes a perfectly good book as well …

Memorising the Landscape: From Great Expectations to Full Metal Jacket

Click here for an investigation into how the Hoo Peninsula has been represented in literature and film.

Click here for Patrick Keiller's essay collection 'Looking Through The Window' which features the essay ‘London - Rochester - London’, documenting a journey made with the architect Cedric Price to Charles Dickens's Swiss chalet in Kent.

"The short haul, down the Medway from Rochester to Chatham, represents ‘a basic shift from retro to necro’." Iain Sinclair

Click here for a review of David Seabrook's weirdly hypnotic Kentish study which includes much social and cultural archaeology of the area.