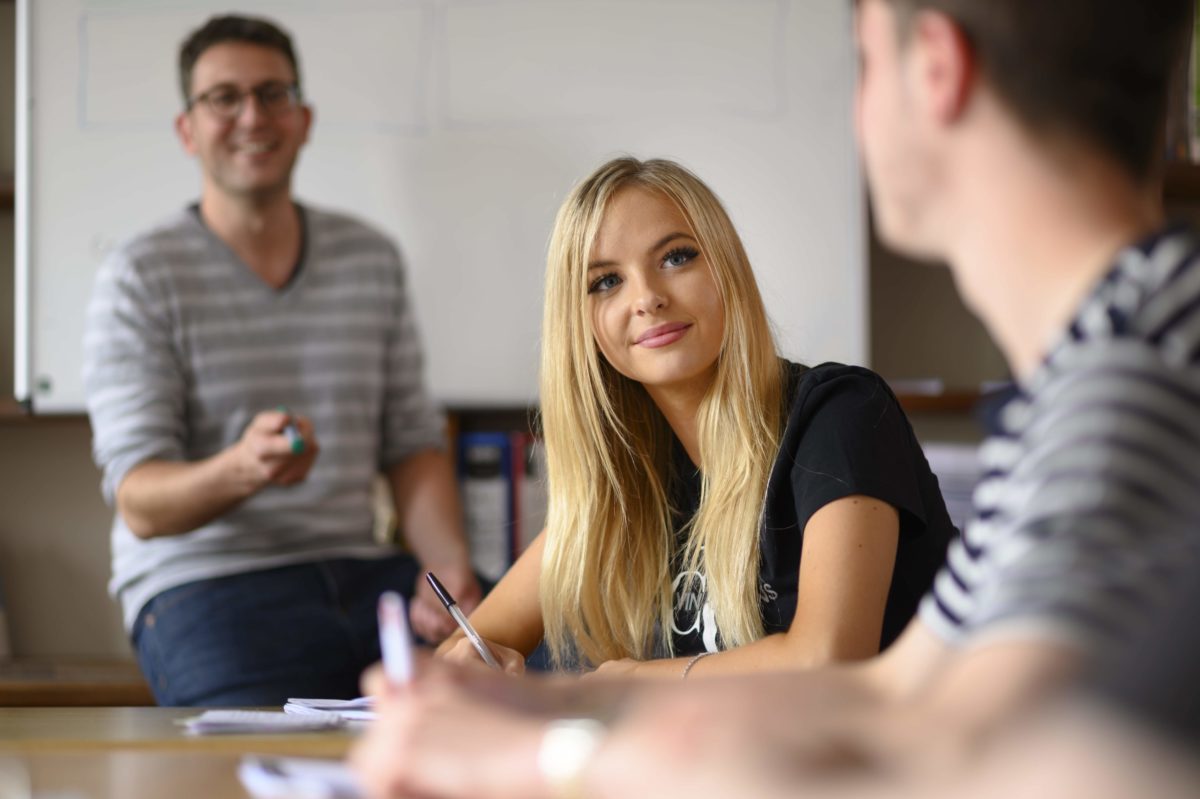 RIC was beyond instrumental for me. It completely reinvigorated my love of learning, and introduced me to my degree subject. I went in completely demoralised, and came out much more confident. It took away all the barriers which had held me back before, and enabled me to be who I had the potential to be.

Many students who miss their A level grades and university places have traditionally faced the prospect of spending an unplanned gap term or even a year retaking their A levels at independent sixth form tutorial colleges.Even in 2021 with teacher assessed grades and much reported grade inflation it is the case that not every student will have met their first choice university offer and therefore be looking at the possibility of retaking with the support of a specialist tutorial college. Many of the best independent sixth form colleges are members of CIFE, the professional association for the sector.

Having paid for private education for our three children since they were small, we assumed after they achieved sound GCSE results that they would secure good A level grades. This didn’t happen. Without moving them all to Rochester Independent College, they wouldn’t have been able to achieve their dreams.

Martin Amis who as a 70s literary enfant terrible worked his way through 14 schools and three crammers immortalised the image of the quick fix A level retake college in his first novel The Rachel Papers. He describes a tour of the A level tutorial college as “nothing more ambitious …than to show me it wasn’t a workhouse or a blacking factory.” In Terence Rattigan’s recently revived The Browning Version the broken and cuckolded schoolmaster Crocker-Harris faces a future at a crammer, a fate represented as exile to a kind of educational Siberia. Even today Country Life reports that independent sixth form colleges specialise in taking in the “the good, the bad and the ugly” who have crashed at traditional independent schools and need a no frills, high cost A level resit educational accident and emergency service.

Historically, the best A level retake teaching at so called retake crammer colleges though was often innovative and stimulating and the atmosphere cultivated was of hard work without the extra curricular distractions of independent school life. The top private tutorial colleges were famed for employing bright young teachers, stripping away the petty rules of more traditional settings and operating an effective system of testing and exam practice. If students were punctual and behaved well they would be treated with a degree of freedom unheard of in a traditional boarding school and more akin to a university. Most of the crammers were based in central London or in Oxford and Cambridge. Flexible timetabling and a bespoke approach to resit strategies and top university entrance were key hallmarks.

Most of the teachers at RIC had teaching styles and generally attitudes that you would not find in any other school.  Their intelligence and their willingness to help you learn was clear. In other schools I think progress can be hindered by making teachers jump through certain hoops of political correctness that may not necessarily be to the advantage of learning, especially by sixth form age. At RIC you didn't have that problem.

Principals at tutorial colleges tended to be practicing teachers- more often than not of Maths- rather than administrators. They were sometimes maverick outliers with idiosyncratic and often highly autocratic leadership styles, underwritten by their status as sole proprietors and the absence of accountability structures such governing bodies. Most continued to teach full timetables even as their colleges grew.

The tutorial college retake crammers pioneered the Easter revision courses that are now an established feature of the educational landscape. Many colleges were at the forefront of welcoming international students to study in the UK and providing them with specialist English language teaching alongside A level classes. The recruitment of pre-university students from Malaysia, Thailand, Vietnam, Nigeria and China was pioneered by the sixth form colleges and the flexibility of approach offered by the sector saw important partnerships forged with international agents and educational consultants.

Some of the best private colleges have evolved into distinctive and high performing independent schools while still offering second chance opportunities for motivated A level resit students including those looking for a distinctive boarding experience. Reflecting this evolution, Rochester Independent College is now accredited by the Independent Schools Council and The Boarding Schools Association. We are an international school, welcoming students from all over the world into our on campus boarding.

At RIC we have always had a broader vision of education than our A level tutorial retake college beginnings might suggest and have evolved into a fully accredited co educational day and boarding school. Unlike many London tutorial colleges the majority of our staff are full time. Many former students have returned to work in teaching and administration roles at the College. Our boarding students all live on campus and our pastoral care and support is as highly structured as our teaching. Our A level retake students benefit from being part of a whole school community whether they are day or boarding.

Students in our Visual Arts department are now as successful as those studying Maths and Sciences and win places at Central Saint Martins and other leading art schools each year.

The Good Schools Guide said that it was hard to imagine a better place for an artist than RIC.

The sector today has retained the strengths of the early pioneers with small classes, exam oriented teaching and a clear focus on university entry. Experienced teachers at sixth form colleges are A-level subject specialists who are often examiners for the syllabuses they teach. Sixth form colleges now are often ISA accredited and many belong to educational groups, offering support in areas such as compliance, staff development, student wellbeing and international recruitment as well as access to greater investment to improve facilities.

Dukes Education operates a number of sixth form colleges. To cite Cardiff Sixth Form College, all are for students who “wish to win a place at the best universities to study courses which will provide fulfilment and challenge.” Similarly, since 1991, Rochester Independent College has welcomed many outstanding young Thai academics who win prestigious places on the programme in a national competition. The Thai government fund the students through their A levels at the College and then through top UK universities. The scholars return home, often after completing doctoral study, and work in senior positions for the Thai government. Some independent colleges have developed specialist niches in their field, Hampstead Fine Arts College establishing itself as the leading pre-university college for the visual and creative arts in the UK. Some independent colleges have retained a focus on A level study as the gold standard for top university entrance, others offer a wider range of programmes including foundation, BTEC, summer courses and high school terms. Earlscliffe offers a University Foundation Year alongside traditional A level pathways and the TRaC (Test, Rank and Coach) system is a key factor of a highly formalised and effective assessment and target setting strategy. St Andrew's College Cambridge is another Dukes Education sixth form college and one of the oldest in the sector having been established in 1976.

While focussed on academics, the 21st century sixth form college sees no compromise on behavioural and pastoral support and co-curricular provision now matches that offered by many more traditional schools. Cardiff Sixth Form College is a familiar name at the top of the league tables but recently the Independent Schools Association nominated the College for a mental health provision award, highlighting its pioneering work in this area. CSFC’s debating prowess, its success at the NASA Space Design and its annual International Citizenship Experience programme are now as noteworthy as its A level results. Rochester Independent College now takes students from the age of 11+ and is well known for being one of a handful of non-uniform independent senior schools in the UK, the Independent Schools Inspectorate judging that the personal development and behaviour of its students was “excellent,” and saying: “The use of first names and informal attire generate a relaxed environment. Sanctions are few in an atmosphere which values respect highly, and rudeness is not tolerated.” FAC now takes students from Year 9 and CSFC celebrated its first year of top GCSE results after the launch of its one year GCSE programme launched a two-year GCSE course for 2021 entry. In 2022 CSFC will open a second campus in Cambridge.

Independent sixth form colleges offer genuine intellectual stretch and challenge for the brightest students and an ideal stepping stone between school and university. The Dukes family of Colleges came together in November 2019 for the first Dukes Renaissance Scholars’ Symposium, focused on the idea of the Renaissance person and an all-round education and fostering the kind of intellectual adventurousness which will enable students to cultivate a broad and humane general knowledge as a context for their academic specialisms. On the programme were three guest lectures, a student debate, attendance at a public lecture by writer and broadcaster Gavin Esler and a ‘ten-mile lunch’ featuring produce originating no more than ten miles from Earlscliffe. This year's event at Fine Arts College included talks from Peter Doig, Alfonso Cuaron, Andrew O Hagan and Mark Urban.

The teaching at Rochester is rigorous and tailored to the best possible exam results. It offers a broad education combining its original focus on getting students into competitive courses such as medicine and dentistry with a new emphasis on the creative arts.

Chat With Students Open House News Room Enquire Now
This website works best with cookies. They allow us to see how the site is being used.
If you continue without changing your settings, we will assume you are happy to receive cookies.
Accept Learn More